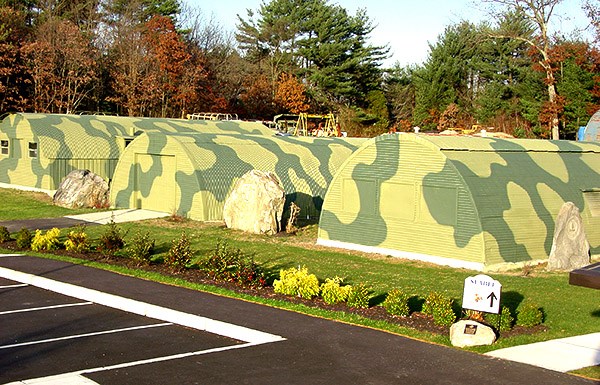 An Overview of the Seabee Museum and Memorial Park

Island X-1 approached the state with a plan to lease or transfer about 6 acres of land, including the historic concrete Chapel-in-the-Pines, constructed by the Seabees in the 1960s, two ammo bunkers, and two Quonset huts. A key component was moving the famous Gate Seabee a few hundred yards north to its present position on the museum grounds.

In order to raise funds, a nonprofit 501(c) (3) corporation was formed originally made up of members from Island X-1 Davisville.

Our Mission and Vision

The original design for the Seabee Museum and Memorial Park. The famous Chapel-in-the-Pines (red roof in the drawing) is currently being renovated; six vintage huts, a store, and a small interim museum are in place. We are currently raising funds needed to build an entrance museum building (to the left of the flags). A vehicle display area (far left) is in the future.

The Mission of the Seabee Museum and Memorial Park Is To:

Provide a memorial to the thousands of men and women who served at Davisville, Rhode Island from its inception in 1942 until its closure in 1994;

To preserve this historical site and this significant period in Rhode Island history, the "Original Home of the Seabees;”

To document the history of the U.S. Navy Seabees; and

To provide a learning site for Rhode Island students.

To preserve the original home and the rich history of achievement, both military and civic, for the “Fighting Builders” and their impact worldwide, we will:

Collect and display materials associated with the U.S. Navy Seabees, especially their association with their original home, the former Davisville Navy Base in North Kingstown, Rhode Island;

Create public displays celebrating the historical contribution of the Quonset hut and the WW II naval pontoons; both developed at the Davisville Base;

Restore and display significant artifacts and vintage construction equipment so the public can better appreciate the historical environment and context;

Create a public park to commemorate the accomplishments and sacrifices of the U.S. Navy Seabees;

Create a depository where former Seabees can donate artifacts and mementos where they can be preserved for future generations; and

We will promote the “Can Do” philosophy as a universally relevant behavior for all who endeavor to succeed in life.

Our New Museum and Small Stores Are Now Open
On May 30th, 2015, the museum and small stores opened for business.

This was a vision that began in February 2008, when New Boston, the developer of the Gateway Projects at Quonset, generously offered to match the first $50,000 raised. In addition, New Boston contributed $20,000 in landscaping and other improvements to the park.

A K Span building was chosen since Quonset Point, the original home of the U.S. Navy Seabees and the home of the Seabee Museum and Memorial park, is also the place where the famous roundtop buildings have been closely associated with the Seabees since WW II was originally designed and manufactured.

Our New Museum and Small Stores Are Now Open
On May 30th, 2015, the museum and small stores opened for business.

This was a vision that began in February 2008, when New Boston, the developer of the Gateway Projects at Quonset, generously offered to match the first $50,000 raised. In addition, New Boston contributed $20,000 in landscaping and other improvements to the park.

A K Span building was chosen since Quonset Point, the original home of the U.S. Navy Seabees and the home of the Seabee Museum and Memorial park, is also the place where the famous roundtop buildings have been closely associated with the Seabees since WW II was originally designed and manufactured.

For two years, the unassembled building has been at the museum awaiting final permits and a foundation. Permits are in hand, and in the summer of 2012, the foundation was dug, and the "shell" of the new building went up in the fall, and interior finishing will commence.

This new building is the "crown jewel' of an idea that began when land for a museum at Quonset Point was leased from the state of Rhode Island. The initial funding to create the park in 2002 was a $329,000 Department of Defense Grant for the Navy Reserve that brought personnel to train at the site. They joined Seabee veterans and volunteers to clear the acreage and begin the creation of today's Seabee Museum and Memorial Park.

Historic Quonset huts were located at Quonset Point and around New England. They were disassembled, moved to the park site, and reassembled to create a unique open-air Quonset Hut museum. The seven Quonset huts on the property have been repainted in a vintage camouflage pattern. While not historically accurate, it lends the Seabee Museum and Memorial Park an unmistakable military look.

The iconic Gate Seabee was saved from demolition and moved a few hundred yards to the northeast onto the park property. Over the next decade, sewers were extended into the park along with new water lines. The front of the property was extensively landscaped with a new lawn, trees, and dozens of shrubs. A sidewalk now connects a handicapped-accessible parking lot to an all-weather 15-foot informational kiosk that explains the historical significance of the park. From there, the walkway takes visitors to our Small Store.

On the property is the 1960-era concrete Chapel in the Pines, built by Seabees. This is one of the most unusual buildings in the world. The exterior walls have been stabilized and repainted, and we have replacement pews. The interior needs to be painted and new flooring installed.

The WW II, Korea, and Vietnam-era Seabee veterans who have given their time and talent to make the Seabee Museum and Memorial Park a reality wanted to make sure that future generations remembered the sacrifices of today's Seabees. The first monument to the fallen Seabees of the Gulf Wars was dedicated in the summer of 2009. A memorial wall with plaques for each of the fallen Seabees is centered by a flagpole that came from the last Navy Seabee administrative building at the Quonset base.

The Seabee Museum and Memorial Park now serve as the home of one of the premier historic military sites in Rhode Island, a place where former Seabees can demonstrate and preserve the "Can Do" spirit and recognize the past, present, and future contributions of the U.S. Navy Seabees. 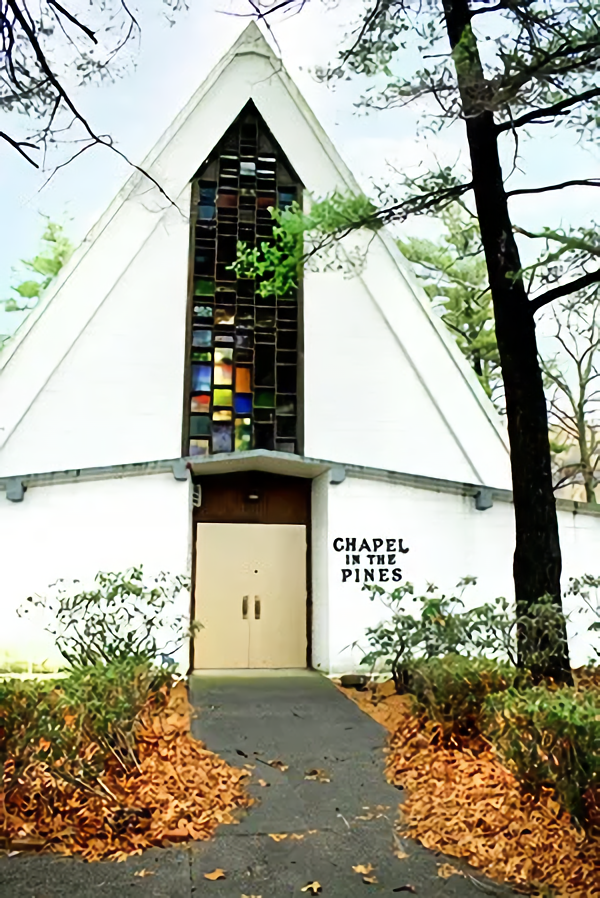 Our future plans include completing the chapel renovation, restoration of vintage Seabee and construction equipment, and expansion of the equipment and memorabilia displays.

In 1942, Davisville, Rhode Island became the original home of the Seabees. We need your help and support to preserve the rich Seabee heritage that started in Rhode Island and is now known worldwide.

Our development plans include an area designed to complement the “Fighting Seabee” where we will display memorial plaques. This is your opportunity to recognize your fellow Seabees or battalion. Family members can honor a Seabee of their own. The engraved plaques are available in two sizes, 2”x4” and 4”x4”.

Both sizes provide ample space for a dedication.

We urge you to take the opportunity to add to our growing number of Commemorative Plaque participants. When you do, you are helping finance the Seabee Museum and Memorial Park as well.

Please review our “Commemorative Plaque Order Form” to fully understand the options available. And of course, if you have any questions, feel free to contact us.
We'll send you a photo of your plaque.

As part of the museum, there is a large grove of pine and hardwood trees along a gently sloping hill. The atmosphere is one of quiet reflection. In this area are memorials to fallen Seabees and battalions. These include stone and brass plaques as well as memorial benches.

The first memorial marker placed on the trail honors Seabee CM2 Peter Lewis Stith of Bainbridge Island, WA. While serving with Seabee Team 0604 of MCB 6, he was killed by enemy fire at Long An, Vietnam, on April 11, 1969.

Memorials can only be added by a vote of the Board of Directors and must comply with the park design standards. If you are interested in a memorial for a family member, friend, or fellow Seabee, please contact us with your request. 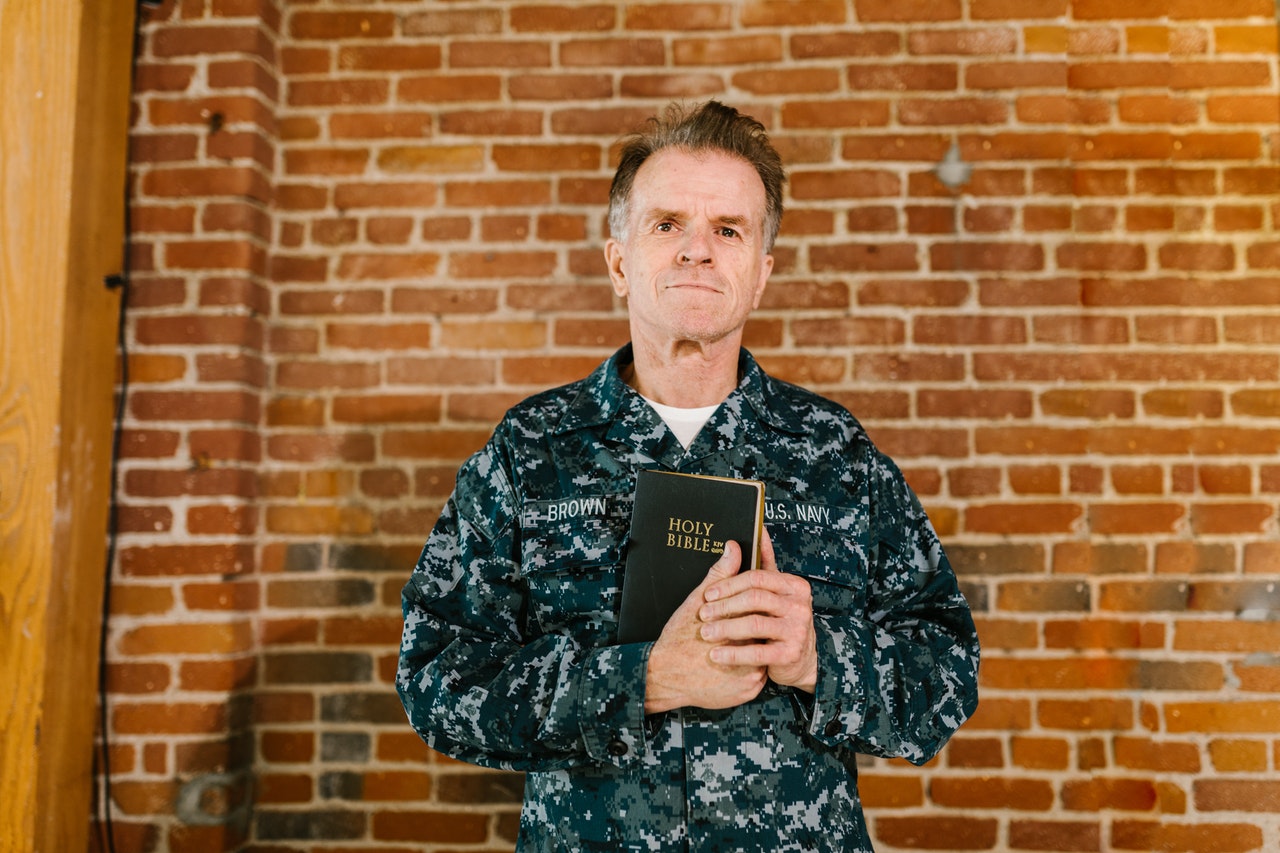 Lord, stand beside the men who build and give them courage, strength, and skill. O grant them the peace of heart and mind and comfort loved ones left behind. Lord, hear our prayer for all Seabees, where're they be on land or sea.